Is There an Indiana Jones Ride at Disney World Orlando? 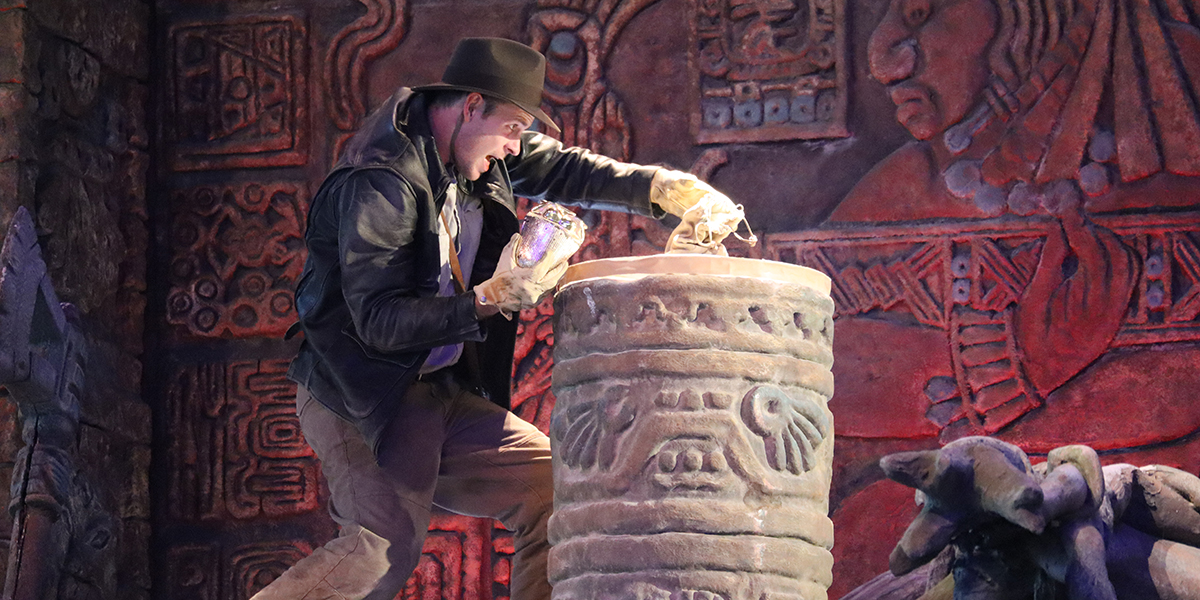 There is not an Indiana Jones ride at Disney World in Orlando, but there is a show (photo by Morgan Overholt/HeyOrlando.com)

When I was six years old, my dad took my best friend Jackie and me to see Stephen Spielberg’s “Raiders of the Lost Ark.”

If you’re a fan of movies at all, you understand what an iconic entrance Harrison Ford makes in the jungles of South Africa.

Seven minutes into the movie, Indy’s running from a giant boulder in a surprisingly well-lit cave. For the next hour and 20 minutes or so I was hooked.

Now, this is the early 80s and my parents were quite young. We’d already had a few missteps at the theater because of a misunderstanding of the movie rating system.

Spoiler alert, I suppose, but when the movie reaches the face-melting scene, I can remember my Dad sitting bolt-upright in the theater trying to decide whether or not it was too late to get us out of there.

I watched with my hands over my eyes but fingers splayed so I could see Indy wisely instructing Marion Ravenwood – who was tied to a post with him – not to look. I obey no such order.

“Cool,” I said in stage-whispered appreciation.

Dad – reassured that he hadn’t scarred me for life – collected Jackie from under the chair where he’d buried his head.

I have loved Indiana Jones from that day forward. For instance, when I was 10 or so I got a bullwhip for Christmas. I could run around the yard pretending to be Indy.

All these years later, I am ridiculously optimistic about the forthcoming fifth Indiana Jones movie. But I remain somewhat disappointed that Disney hasn’t done more with the intellectual property it owns.

However, there has been some hope. Earlier this year, Disney rolled out several cool Indiana Jones-themed souvenirs for its parks. In fact, they make perfect gifts for the Indiana Jones fan in your life.

Maybe that’s a hint of things to come. After all, Indiana does have some presence in a handful of the 12 Disney parks worldwide.

Will Disney expand on the Indiana Jones IP?

I think the Indiana Jones IP is underutilized in the park and ripe for a Harry Potter or Star Wars Galaxy’s Edge-level park section.

Maybe the new movie will do big business and inspire Bob Iger to get the job done. Yes, I know there are rumors about other things coming for the former dinosaur land in Disney’s Animal Kingdom.

But are you telling me you can’t work out a connection to noted archeologist Henry Jones Jr. that would make sense in nearby Dinoland?

You couldn’t work out something with Dr. Jones near the potential Magic Kingdom expansion over by Big Thunder Mountain Railroad?

Heck, the southwestern desert theming on the railroad aligns almost perfectly with the Indy origin story from the beginning of the “Last Crusade”.

An Indiana Jones diner – no we’re not selling any of the culturally ridiculous stuff from the “Temple of Doom” – that sells a Holy Grail drink would do great.

Is anyone over at the Walt Disney World Resort listening? I’m handing out multi-million dollar ideas over here, Bob.

Read Also: Breakfast at Hollywood Studios: Best places to eat in the morning

Is the Indiana Jones ride still at Disney World?

There is not an Indiana Jones ride at Disney World in Orlando. Disneyland Park in California does have the Indiana Jones Adventure ride.

In Disneyland Paris, there is Indiana Jones and Temple of Peril, a runaway rail cart ride coaster ride loosely similar to the mine escape from “Temple of Doom”.

There’s no ramping across the missing track, but there is a loop.

Is there an Indiana Jones ride at Disneyland?

Disneyland has a ride, and it’s something I wish they’d bring to Disney World. It’s a thrill ride, not a coaster.

It features a 12-person ride vehicle that moves swiftly through the crumbling Temple of the Forbidden Eye past intricate booby traps. Guests get to inspect carvings and frescos – but absolutely no looting.

They learn the story of Mara, a powerful deity who promises great treasures. Vengeance befalls those foolish enough to gaze into its all-seeing eyes.

The ride simulates going over tough terrain as guests brave unimaginable perils aboard the rugged troop transport that carries them into the Chamber of Destiny.

There are also dangers not taken strictly from the movies like screaming mummies, swarms of giant insects and spear-throwing wraiths.

What park has the Indiana Jones ride in Disney World?

In Orlando, the Indiana Jones Epic Stunt Spectacular! is at Disney’s Hollywood Studios, near Echo Lake. But it’s a show, not a ride.

How long is the Indiana Jones show at Disney?

The show at Disney World is about 25 minutes long.

What is the Indiana Jones Epic Stunt Spectacular at Disney?

It’s a stunt show – like the Bourne Show at Universal – but featuring the significantly cooler Indiana Jones.

There’s even a big dang boulder.

They also stop to explain the stunts and also reveal how to safely throw and take punches, fall from tall buildings and wield whips.

Have you seen the Indiana Jones Stunt Spectacular? What did you think? Let us know in the comments!