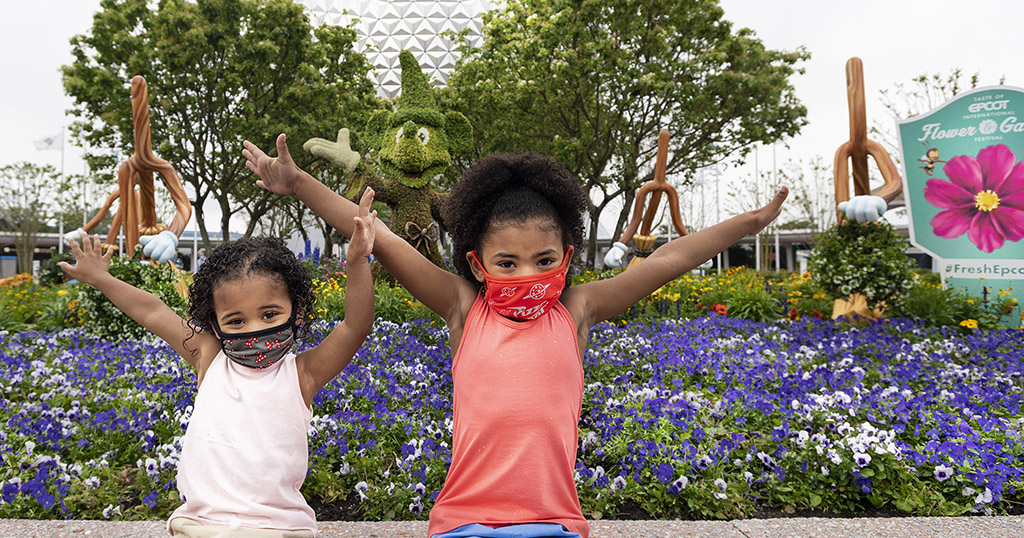 Festivals, including the Taste of EPCOT International Flower & Garden Festival also tend to have special attractions for the little ones at EPCOT (photo courtesy Walt Disney World Resort)

A few years ago, when our youngest Ainsley was two, we recruited my mom and stepdad to assist on a brief Walt Disney World vacation.

And we booked a cabin for all of us at the Ft. Wilderness Resort.

They toured and they strolled. And they hung out and ate and shopped.

Ainsley rode in a stroller. Ate ice cream. Saw Mickey Mouse and Minnie and Belle and Mulan and Mary Poppins and went Under the Seas with Nemo. She had a great time.

But over the years EPCOT has been an old people’s park. And I don’t think that reputation was unearned.

Still, EPCOT has some great rides. And certainly, with the additions of the Frozen ride, Remy’s Ratatouille Adventure and the upcoming Guardians of the Galaxy ride, the park has really gotten a boost for kids ages 7 or up.

It needs more work, in my opinion, to match Hollywood Studios with the pre-teen, teen and young adult crowd. But I’m not sure people know how great it is to take a toddler to EPCOT.

It’s Disney so yes, of course. But EPCOT is better for toddlers – in my opinion – than five or six-year-olds.

Outside of the Nemo ride and aquarium – which is terrific for all ages – there aren’t a lot of rides for small children in EPCOT.

At 5 or 6, that can be a problem. But at the age of 2? Riding in the stroller and looking at everyone is pretty much the same thing as It’s a Small World in the Magic Kingdom.

Sure the original park has more rides that are good for kids ages 2 to 8, but for very small children, you have to think about what the reasonable expectations of a day at the park are.

The truth is, you can have a great time visiting EPCOT with a toddler in a stroller, more so than the other non-Magic Kingdom theme parks Hollywood Studios and possibly Animal Kingdom.

What can a 2-year-old do at EPCOT?

Look, when we took the little ones anyplace outside of Fantasyland, it was about identifying what made them happy.

At that age, Mickey and Minnie and the other Disney Characters are real-life. So anything that allows them to see their favorite characters is like if we adults got to meet one of the Beatles, or Harry Styles or George Clooney. Their day is made.

Also, the Finding Nemo ride at the Seas Pavilion is great for young kids. And unlike some of the other kids’ attractions, you won’t be bored either.

Make sure you do the Turtle Talk with Crush. You haven’t lived until you’ve heard your shy, wallflower of a daughter scream at an animated turtle for not recognizing a football helmet.

“Why are you so angry,” Crush asked, and I thought, “That’s my child.”

In addition to the sea turtles, there’s a lot to see at Epcot’s coral reef including manatees and dolphins and more. It really is one of the best attractions in Disney.

Walking around the world is cool for a toddler, too. There are plenty of shady places to stop and rest and be entertained by new sights and sounds.

There are characters and princesses and colorful new worlds to explore. When John Paul was little – slightly older than a toddler – he met Tinker Bell in EPCOT and was mesmerized.

EPCOT also has a splash pad where the little ones can cool off and plenty of air-conditioned shops and restaurants. Heck, if your little one is a Frozen fan, the gift shop in Norway is a half-flight of stairs short of heaven.

There is also Akershus Royal Banquet Hall in the Norway pavilion.

We booked a VERY expensive dinner there thinking Ainsley would be all about hanging with the princesses. WRONG. She enjoyed meeting the princesses at character meet and greets out in the wild. But by the time we got to the Banquet Hall, she was quite hungry and unwilling to stop dining to spend time with the princesses when they came around.

Snow White? Sorry, ain’t nobody got time for that. These chicky nugs are not gonna eat themselves.

The breakfast at Chef Mickey’s however, was a massive hit. At that age, I recommend mice, not princesses for character meals.

Also, for the record, I thought the meal in Cinderella’s Castle was better but to each their own.

The boat ride in the Mexico pavilion is also good for young children, it’s a dark ride, air-conditioned and does not typically have long lines.

My son, John Paul, could have spent hours watching the model trains in the Germany Pavilion when he was a little guy in EPCOT, so be sure to leave time for them to explore that.

What age is best for EPCOT?

The answer to that question is changing as we mentioned earlier.

For now, prior to them re-theming the Gran Fiesta Tour starring The Three Caballeros into something Coco-related, I think EPCOT is best for older kids, pre-teens, teens and adults. That is not to say little kids can’t have fun, it’s just that other parks are more dedicated to them with popular rides specifically for small kids.

What is better for toddlers EPCOT or Hollywood Studios?

EPCOT, I think. We do have a video of a young Ainsley going crazy for Darth Vader, but by and large, I think for the youngest kids. With all that in mind, the breakdown is as follows:

You might think Animal Kingdom would rank a little higher. However, the animals aren’t exactly easy to get to or see for little ones.

Animal Kingdom does have the Lion King Show and DinoLand USA which has great kids’ stuff.

For toddlers, Magic Kingdom is clearly tops with appropriate rides, parades and character interactions. EPCOT is second for reasons we’ve discussed. Animal Kingdom is third and Hollywood Studios is last.

Even Toy Story Land doesn’t have a lot for a toddler to do. The Frozen show is an exception but there are only so many times you can sit in a room and get pelted with fake snow even if that room is air-conditioned.

Hollywood Studios is making a push for Best Disney World Park but for the older children.

Ultimately with patience and a clear understanding of what a successful day at Disney Parks looks like for a toddler, you can have fun at any of the parks. But don’t sleep on EPCOT.

Do you have tips for taking toddlers to EPCOT? Let us know in the comments.