What Is the Knight Bus in Harry Potter? Is the Bus at Universal Real? 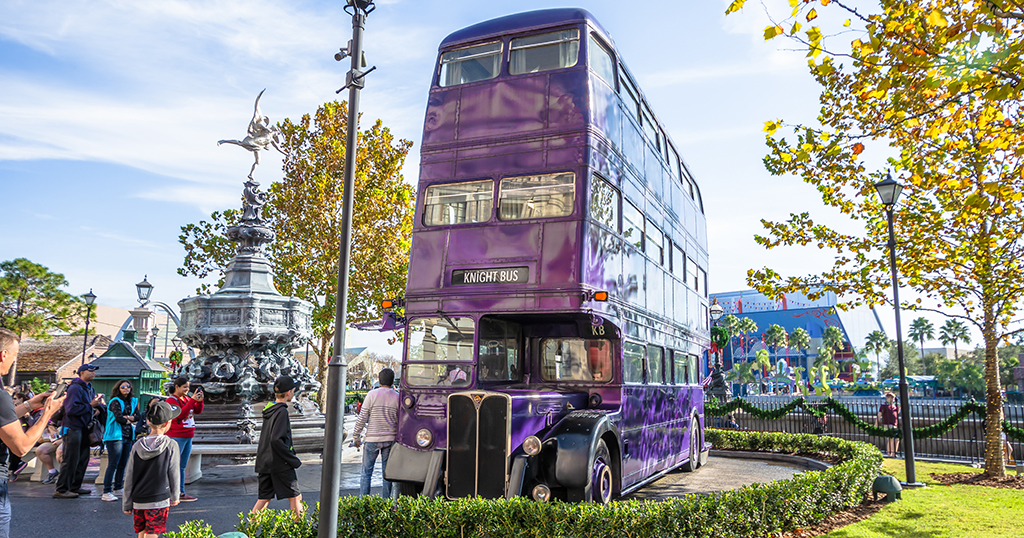 The Knight Bus at Universal was one of the two real props used in the Harry Potter films (photo by Chansak Joe/shutterstock.com)

As a long-time Harry Potter fan, there’s not much that gets me quite as excited as seeing the magical wizarding world come to life.

As a teen, I often attended midnight releases of both films and books. I visited the Wizarding World of Harry Potter at Universal as soon as it opened.

I’ve returned many times since then, even getting engaged in Olivander’s wand shop.

It’s safe to say that the park has a special place in my heart.

Although the entire theme park is incredibly well done, it’s fun to know which parts are the “real deal”.

Notably, the purple Knight Bus at Universal is about as real as they come.

What is the Knight Bus in Harry Potter?

The Knight Bus is a purple triple-decker bus in the Harry Potter series.

In the book, the bus is described as “violently purple” with its own name spelled over the windshield in gold lettering.

The purple bus offers emergency transport for stranded witches and wizards within the wizarding community.

To ride the bus, stranded individuals just stick out their wand hand. Then, they can hop on board and the bus takes them anywhere they want to go, as long as it’s on land.

Nothing underwater, of course.

The inside of the bus has beds instead of seats and a large swinging chandelier at the top of the bus. Candles sit beside each bed, showing the wood-paneled walls.

The Knight Bus is similar in the Harry Potter films and books.

However, one of the largest differences between the film and book’s version of the Knight Bus is the addition of the shrunken head in the film.

This shrunken head is also a feature at the bus displayed at Universal Studios.

Which Harry Potter book has the Knight Bus?

The Knight Bus first appeared in the “Prisoner of Azkaban”, which is the third installment of the Harry Potter series.

How much does the Knight Bus cost?

For muggles? It’s included in the admission price at Universal Studios. For displaced wizards and witches? That’ll be eleven sickles.

But if you’re reading this question to prepare for a Harry Potter trivia night, they may also accept alternative answers.

The last time I played Harry Potter trivia, one of the other groups disputed the answer of “eleven sickles” and moderators adjusted accordingly.

Who was the Knight Bus driver in Harry Potter?

When our young Harry Potter boards the bus, he is greeted by Stan Shunpike, the conductor of the Knight Bus, who wears a purple uniform.

Stan is also generally near the bus at Universal to greet visitors.

How did the Knight Bus find Harry?

Harry accidentally summons the Knight Bus after he leaves the Dursleys.

He’s trapped in the muggle world, worried that he may be banned from Hogwarts after breaking the Decree for the Restriction of Underage Wizardry.

Harry sees what he thinks is a large, black dog in the bushes (spoiler alert, it’s Sirius Black) when the magical purple triple-decker bus pulls up.

The book goes into more detail, as books do. After Harry boards the bus, the bus immediately begins down a different street and Harry finds out that they’re suddenly somewhere in Wales.

In the book, we also meet Madam Marsh, who is described as a faintly green witch wrapped in a traveling cloak. She makes a few other cameos throughout the series.

Where is the Harry Potter Knight Bus?

Currently, the Knight Bus is parked at the London Embankment in Universal Studios in Orlando, Florida.

Guests can look through the windows to see the beds and chandelier.

The bus also offers a good photo opportunity and character meet and greet. Guests can also interact with the shrunken head.

Is the Knight Bus at Universal real?

Yes! According to Universal’s website, this bus is one of the two real prop buses used in the Harry Potter films.

Additionally, there’s a Knight Bus at the Warner Brothers Studio Tour in London. I was able to view both in person. The London Knight Bus is pictured below.

Read Also: Does Disney own Harry Potter? The Wizarding World that almost never was

What else is near the Knight Bus at Universal?

The Knight Bus is parked outside King’s Cross station.

Harry Potter and the Escape from Gringotts is also on this side of the park.

Here, you can walk around Diagon Alley and dine at many magical-themed eateries.

For example, you can visit places like The Hopping Pot, Florean Fortescue’s Ice Cream Parlour, The Fountain of Fair Fortune and the Leaky Cauldron.

The Hogwarts Express connects Universal Studios and Islands of Adventure. Remember, you have to have a park hopper ticket to be able to ride the train since it connects both parks.

Have you seen the Knight Bus? What did you think? Let us know in the comments below.