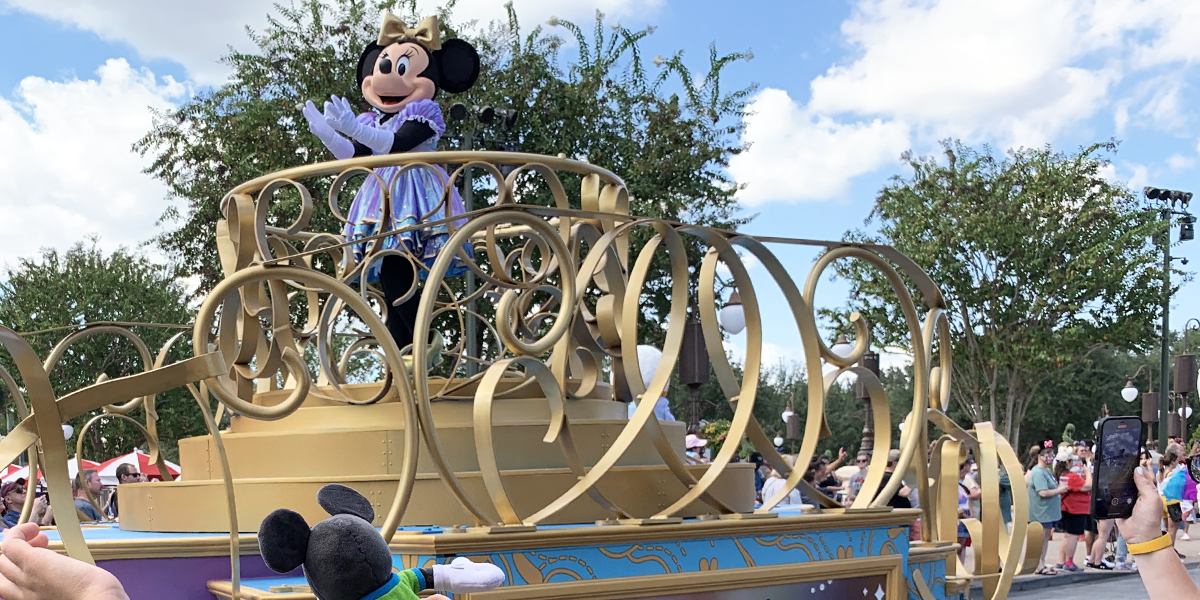 Kids of all ages enjoy waving to their favorite characters during Disney parades (photo by John Gullion/HeyOrlando.com)

I fell in love with the Disney parades during my first trip to Orlando’s Walt Disney World Resort in 1979.

I was about to be five and was mesmerized by the Main Street Electrical Parade. We stayed for a week and I didn’t want to leave the park each night until I’d seen it.

Each bright float, carrying some of my favorite Disney characters, like Peter Pan, Dumbo, Pinocchio and Alice in Wonderland, was a marvel.

I was thrilled when they brought it back in 2010, just in time for my daughter’s first trip. We managed to see it several times before it was returned to mothballs.

In fact, each time, Pete picked my daughter out of the crowd and chatted with her from atop his dragon, Elliot.

What is special about a Disney parade?

Disney parades made a big impression on my daughter Sofia from the start.

But it wasn’t only the nighttime parade she loved. I can remember her, in her Tiana dress, on the way to dinner at the castle. We were met with a parade and stopped on Main Street to watch.

As the parade passed, she waved frantically then spun, turning to me to yell, “Goofy waved at me, Daddy.”

That moment is one of my strongest Disney memories and I got its echo the last time we went to Disney.

The three kids with their big sister Sofia led the way, waving at the characters as they came by.

The littlest one, Ainsley, holding her Minnie Mouse stuffy above her head desperately trying to show Mickey she had it while the middle one – her big brother – was standing beside her pointing to the doll trying to help her get the acknowledgment she wanted.

When Mickey recognized and signaled with a thumbs up, all three celebrated in a too-rare show of sibling unity.

Is there a parade every day in Magic Kingdom?

Yes, Magic Kingdom has a daily parade unless there is a cancellation due to inclement weather.

What time is the parade in Magic Kingdom?

There are also several cavalcades running at least through the end of the 50th celebration in March. Cavalcades are essentially smaller parades featuring grouped characters.

The Disney Adventure Friends Cavalcade features Mirabel from “Enchanted” and Miguel from “Coco” – two popular new characters. Moana is featured as well as characters from “ZooTopia” and “The Jungle Book”.

Does Magic Kingdom do a night parade?

Also, the Electrical Parade isn’t gone forever. There have been several return engagements at Disneyland.

If the parade can return for limited engagements at Disneyland, there’s no real reason it can’t return for similar runs at the Magic Kingdom.

Read Also: Disney World in January, is it a good time to visit?

What is the current Magic Kingdom parade?

It’s the one with the cool Maleficent Dragon that breathes fire.

It features some very popular characters like Elsa and Anna from “Frozen”, Merida, “Sleeping Beauty” and Ariel, aka the Little Mermaid.

There are also dancers and stiltwalkers. It’s quite a production.

What route does the Disney Festival of Fantasy parade take?

The Festival of Fantasy Parade route starts in Frontierland and then works its way through Liberty Square.

Once across the Liberty Square Bridge, it makes its way in front of Cinderella Castle and around the loop and down Main Street USA to Town Square, exiting to the right over by the barbershop.

Does any other Disney theme park have parades?

Currently, Magic Kingdom is the only one of the Disney Parks to have a parade.

However, Disney’s Animal Kingdom has flotillas and Disney’s Hollywood Studios has cavalcades.

Hollywood Studios was running a Pixar character cavalcade with the Incredibles and more but has switched over to the Santa Motorcade for the holiday season.

At Animal Kingdom, characters in costumes sail around the park on a pontoon boat.

Where are the best places to see parades in Magic Kingdom? Tips and tricks

Sometimes, if you’re not worried about the iconic photo opp in front of the castle, it’s best to set up in Liberty Square or Frontierland. Then, after the parade, you can slip over to Fantasyland and ride attractions while the parade is still working its way down Main Street.

Any place on Main Street is pretty good, but it’s best to stake your plot of land out early. People will start lining up for primo parade spots early, just like the fireworks.

Honestly, as long as you’re right on the curb, the parade viewing is pretty good.

Make sure you watch for the white tape that gets marked off. Disney keeps certain areas clear so pedestrian traffic can continue to flow through the park until the parade arrives in that specific spot.

If you’re unsure whether the tape is delineating a good area or a prohibited area, just ask. There are always plenty of cast members around.

Also be aware, even though it’s the most magical place on Earth, people can get heated over their parade spot.

Often people who have been holding down the fort for a while get frustrated at the crowd trying to squeeze in at the last moment.

For instance, I was sure we were about to see fisticuffs over a parade that ended up getting rained out on a recent trip.

Remember to enjoy the experience.

Do you have a fond memory of a Disney parade? Let us know in the comments!