Is There a Star Wars Hotel? How Much Is the Galactic Cruiser Resort? 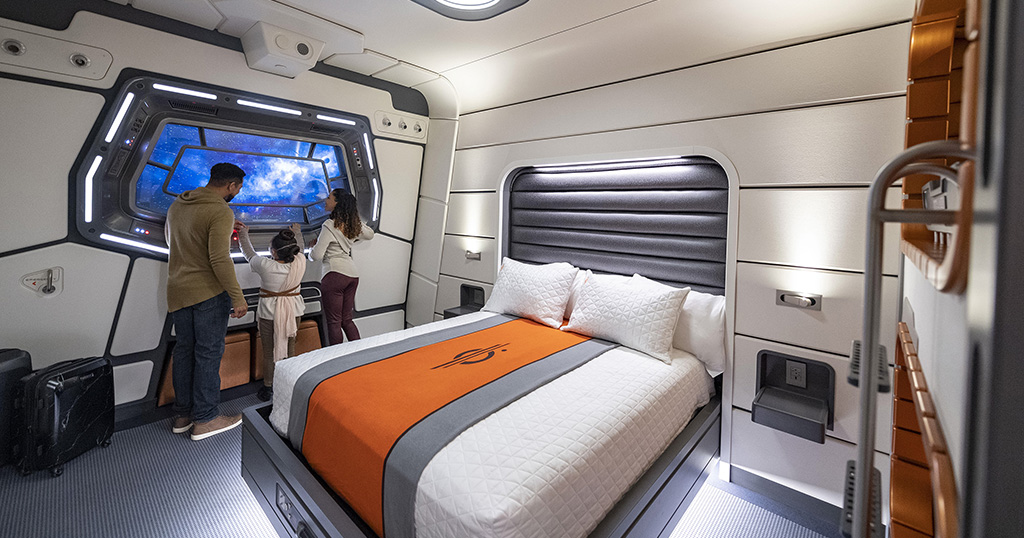 I would have been four with a thick, blondish brown bowl cut and checkered slacks. I looked like that kid from the Allman Brothers album.

We were visiting my grandparents in Lawrenceport, Indiana, a community that consists of little more than an intersection of two country roads and an old graveyard.

My grandparents had a two-story white farmhouse and a big yard with a garden and fruit trees. And I was free to explore, have adventures and eat fresh food. Specifically, I had a taste for sour things. Lemons, rhubarb, anything that could put a pucker on your face, I loved it.

And so one warm, sunny day in the late summer or early autumn, I found the crabapple tree. Crabapples, if you don’t know, are tiny, wild apples. They’re perfectly safe to eat as long as you avoid the seeds and core. Before they’re ripe, they can be pretty sour.

And so, my grandmother, Nanny, came out into the yard to find me under the tree, munching away.

“John Aaron!” she said, using both my first and middle names as she still does today. “Put those down, you’re going to make yourself sick.”

I stopped and looked at her, considering her words carefully.

I’ve had several obsessions in my life. The Beatles, various sports teams, beloved books and movies and, of course, Disney World.

Star Wars is probably the one I’ve held the deepest for the longest time.

As I approach my 50s, many of the memories of my youth are fading. I mostly only have the stories that other people tell about me.

The first time, I couldn’t have been much older than when I ate the crabapples. I was playing outside with my men on a bright day. I lined them up on Dad’s car across the bumper and the back of the car.

They were still there when he left for the night shift at work and they must have hung on for a while. When he came home, they were gone, including my beloved Ponda Baba, aka the Walrus Man.

The second time I lost my men was during the winter a year or so later. We’d moved to a new house and snow covered the yard. I built a tiny snow cave and hid my stormtroopers inside.

In the course of playing, the cave was crushed and my men lost. I waited, patiently, for the snow to melt. In a Northern Indiana winter, that can take some time.

When the snow melted, I went right to where those men should have been. They were gone.

It’s been 40 years since I’ve set foot in that yard or even been to the neighborhood, but I swear to God if you took me there today, I could take you right to the spot where my troopers went missing.

I tell you all that to tell you this: In many ways, Star Wars was my childhood religion. In fact, I believed in it like I did Santa Claus or the tooth fairy or any other wonder of youth.

Of course, I grew out of that. But my fondness for the world of Luke and Leia, and later of Ahsoka and Maul and Mando and Grogu, has remained.

Is there a Star Wars themed hotel?

When Disney announced plans to build a Star Wars adventure world in Hollywood Studios, I was thrilled and patient.

Patient for the construction. Patient when I couldn’t get a press pass to the opening and patient again when 2020 cancellations thwarted our first attempt to visit Batuu.

When Disney further announced plans for a Star Wars themed hotel, it only escalated our anticipation. We love visiting Disney and staying at Disney’s park hotels. This was gonna be great.

An entire week staying in a Star Wars themed hotel? It was as if the Disney Imagineers were building something just for me.

Like we’d book our stay, check-in and find Ponda Baba, Hammerhead, Snaggletooth and a handful of stormtroopers waiting patiently to be found after all these years.

But then the eyebrow-raising details and first looks of the hotel began to emerge. This wasn’t going to be like other Disney hotels. It wouldn’t be just a place with a cool theme where you can rest and relax before going out.

Instead, it’s like a stationary cruise ship, they said. Disney has designed the Star Cruiser so that you mostly stay in the hotel, take an excursion to Batuu to eat and soak in the culture of the outer rim territory.

Of course, you could go out into the wider world and explore the rest of the park, but if you do that, you’ll be missing precious time.

When can I book Star Wars Galactic starcruiser?

Are you interested in having the first look at the ship? Booking is now open. But brace yourselves, it’s a hefty price tag.

The time is precious because Disney is limiting guest stays in the Galactic starcruiser hotel, which opened March 1, 2022.

Galactic starcruiser guests can arrive at the Walt Disney World Resort terminal, board a launch pod and explore the magnificent Halcyon starcruiser.

Right now, it’s limited to a two-day experience. You can book a two-night stay in outer space and after that? You ain’t gotta go home, but you better move on to the next wretched hive of scum and villainy.

The suggested itinerary for the immersive adventure includes about four hours of time in Batuu – which is spectacular and perfect and everything – with what appears to be preferred access to the two magnificent Batuu rides, Smugglers Run and Rise of the Resistance, which may well be the greatest amusement park ride ever conceived by man.

The Star Tours ride, which is outside the boundaries of Batuu, is not included in the suggested itinerary.

Your time aboard the Halcyon – the official name of the Star Cruiser – could include the following:

There are also various musical entertainments and a role-playing sidequest Disney is calling a Star Wars story moment.

You can also prove your mettle to join an elite smuggling ring or hide a stowaway to help the Resistance. Whichever path you choose, you can carry out your mission over the course of your stay.

Your only full day on the cruiser ends with something called the spectacular finale. The next morning you’re fed and out of the hotel/cruiser by 10 am. You’ve had a little less than 45 hours to enjoy your galactic Disney experience.

So how many credits will this brief but exciting trip cost before you have to return to your home planet?

How much does it cost to stay in the Star Wars hotel?

Unlike the regular Disney booking process, you have to call and book your galactic cruise. I just called and got the old “experiencing high call volume” message that suggested I go to the website and let the FAQs be with me.

Disney does offer a semi-helpful pricing guide. The standard cabin, which sleeps 4-5 passengers with a queen bed, two bunk beds and an optional pull-down bed, appears to be the most affordable option.

Starting prices, which can change depending on what cabin or suite you select, are at the time of writing for a two-night stay:

Needless to say, it’s a steep price point for a lot of people.

And sadly, Disney remains flummoxed by people like my wife and me who made more than two babies. I am continually disappointed by how poorly Disney is prepared to accommodate a family of five with two small children.

How much would it take for my family to enjoy this once-in-a-lifetime Star Wars universe experience?

For a reference point, we took our family this past October and did 5 days in Disney.

We stayed off-site and saved significantly on cost. Without going back and pricing it exactly, our hotel and park tickets for a five-day vacation was less than $3,000. It’s hard for me to imagine paying double that for a less than two-day excursion.

For further comparison, we could book a five-night stay at the Port Orleans Resort with five days in the parks for $4,000 this May. All I have to do is click the button (and pay at some point).

If you want to get to starcruiser level pricing, Disney’s Animal Kingdom Lodge has suites that run about $3,000 per night.

The pricing and the planning has cooled the fan fervor that began when Disney announced the Star Wars-themed hotel.

And some of the things to do have come across as more than a little cheesy as Disney has tried to promote the March 1 launch.

Me? I’d still love to go. I bet most Star Wars fans would.

As cheesy as the starcruiser may seem, Batuu is truly spectacular. The rides are among the best I’ve ever experienced. I could easily spend two days in that world and be happy.

If the same people who built that world are in charge of this incredibly expensive hotel, then I have to believe it’s going to be spectacular – at least for those who can afford it.

But I’ll also admit that something seems off.

There’s an ad on the Disney site, a quick promotional video when opening the starcruiser page. It’s a dad and his family dressed in Jedi robes ready to race off and enjoy the adventure for which they’ve dearly paid.

“For the first time, it’s real,” a voiceover says as the plaintive horns of “Binary Sunset” begin.

I turned it off without watching the rest, suddenly more than a little sad and slightly angry.

How can they not know, especially after all this time and billions of dollars invested?

It has always been real.

Would you want to try the Galactic starcruiser experience? Have you ever tried an immersive hotel experience? Let us know in the comments.

For more information about the new hotel, visit the Disney World website.