What Does the Tree of Life at Disney Represent? Things You Didn’t Know 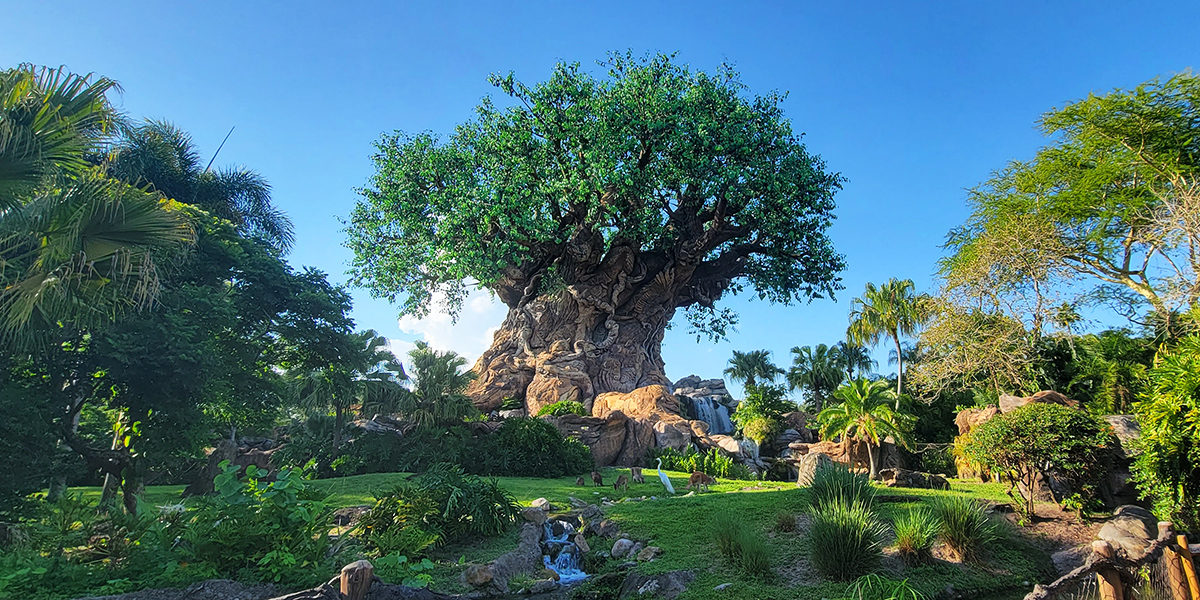 The Tree of Life at Disney World features hundreds of carved animals (photo by James Overholt/HeyOrlando.com)

Most of the Walt Disney parks around the world have a centerpiece.

Often it’s a castle. Occasionally, it’s a golf ball – but whatever it is, it must be iconic.

They failed this task at Disney’s Hollywood Studios.

To illustrate, at one point, the park had a giant version of Mickey Mouse’s hat from the Sorcerer’s Apprentice portion of “Fantasia”. I didn’t mind it.

I thought it served its purpose well as a beacon of magic, but it must have been underwhelming because the Walt Disney Company tore the thing down in 2015 and never bothered to come up with a suitable replacement.

So Hollywood Studios is left without a park icon. I’m still holding out hope for something Star Wars-related.

Which Disney park has the Tree of Life?

The Tree of Life is the centerpiece of Disney’s Animal Kingdom Park.

In the middle of Discovery Island, the tree – a giant Baobab – serves as the practical center of the park, surrounded by paths and trails and water.

It makes for especially beautiful views from the Africa and Asia sections of the park.

Is the Tree of Life in Disney World real?

It’s real in the same way that Cinderella Castle is real. It exists.

It is not, however, a living, growing Baobab tree.

Can you go inside the Tree of Life at Disney?

Yes, sort of. You can go under it. There’s a theater in the root system that hosts the show It’s Tough to be a Bug!

In the vein of Mickey’s Philharmagic in the Magic Kingdom or Muppet Vision 3D in Hollywood Studios, the 8-minute, 3D movie and multimedia show star Flik and Hopper from the Disney and Pixar film “A Bug’s Life” along with a supporting cast of insects who provide a surprising glimpse inside their bug-eat-bug world.

Word of warning, we took my daughter Sofia when she was little and as part of the interactive portion of the show, they make it feel like an army of bugs is crawling under you and across your chair in the Tree of Life Root system.

Sofia freaked. In fact, it took us 30 minutes to calm her down.

If your kids prefer their bugs on the screen, maybe skip the show.

What does the Tree of Life represent at Disney World?

Disney says the 145-foot Tree of Life honors animals and the place they all share in the great circle of life. And also, it’s an epic visual symbol of the diversity, beauty and interconnected nature of Earth’s creatures.

Which … you know, cool? However, I think to most people it’s a big pretty tree. At 145 feet tall, the massive tree towers over the land.

With its gnarled roots and outstretched branches, it really is a marvel that does make for great photos.

How does the Tree of Life honor animals?

Well, there is a bunch of wildlife carved into its branches. You can stroll the Discovery Island trails to see the shapes of over 300 carved creatures in the tree.

But also nestled amid the burrowing roots at the base of the Tree of Life is a serene landscape of pools, meadows and trees, home to a variety of live animals, including lemurs, flamingos, kangaroos and tortoises which you can view from a distance that is safe both for the guests and the animals.

In fact, animal encounters with living wildlife are a key part of the Animal Kingdom experience.

What kind of animal carvings do you see as you walk around the great tree?

I grew up around the corn fields of Indiana. Anytime I can see a deer, or in this case a faux deer, and it’s not about to jump into my windshield, I consider that a win.

I’m fascinated with a pelican’s jaw pouch. I like any animal that comes with a mouth purse.

I am a fan of chimpanzees as long as I don’t have to get close enough that they can rip off my face.

Chimp carvings come with a very low chance of this.

Love the rhino, its horn opens up the floor for all kinds of Dad humor.

The chimp corollary. Any baboon that can’t get to you is a good baboon.

I love giraffes. They give me a great opportunity to share Dad’s knowledge.

Just goes hand in hand with Africa and the Lion King show.

Well, one very famous mouse in particular. It’s a fun game to be the first in your party to spot Mickey.

Do they do any kind of shows at the tree?

In addition to the bug story, the tree is the focal point of the nightly show Tree of Life Awakenings.

I was gonna make a Robin Williams/Robert DeNiro joke here, but I’m wondering how hip our readership is to 30-something-year-old Oscar-bait movies. Robin Williams sports a beard, so you know it’s serious.

Anyway, Tree of Life Awakenings is an amazing nighttime show that is visually stunning and thematically a tad cheesy.

Sure, it’s beautiful to see the glowing leaves illuminate the tree as flickering fireflies magically appear and stir to life the animal spirits.

However, do I really want to watch as a young doe embarks upon a thrilling journey or behold love blossoming between a pair of hummingbirds? Am I interested in a sly fox spreading gifts of love among the denizens of a wintry forest? Reader, I am not.

Read Also: A guide to Magic Kingdom at night: Shows, rides and things to do

Where is the best spot to get a picture of the tree?

I’m partial to the area around the bridge between Discovery Island and Africa. But the entire section between Africa and Asia is full of great spots.

Honestly, the tree is so well designed, pretty much any place you can see it from is pretty good for pictures.

What do you think of the Tree of Life? Have you found Mickey in the tree? Let us know in the comments!