The Universal Studios Globe: A History of the Iconic Symbol 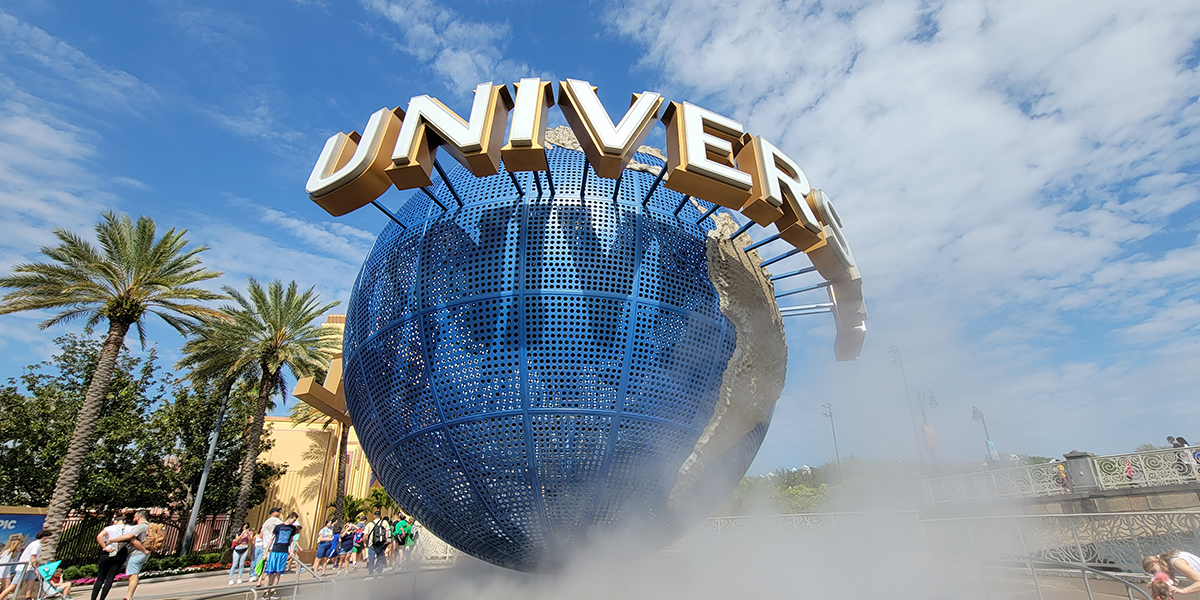 The globe icon has been with the company since the beginning (photo by James Overholt/HeyOrlando.com)

So, I don’t really know how to say this without just jumping in. But I have a special skill, a talent even.

It’s not worth much. I can’t even prove to anyone else I have it.

I can play my ear drums.

You can’t hear it. Only I can. The best I can describe it is that it sounds like someone doing a drumroll. I’ve seen others who have the same skill describe it as sounding like thunder or roaring.

It turns out that those of us – we lucky few – who can make such noises have the ability to contact our tensor tympani, a small muscle located above the auditory tube.

The practical applications are nil. However, for years I’ve been able to entertain myself by reenacting the old 20th Century Fox fanfare that rolled before the start of every 20th Century Fox movie – which when I was younger included Star Wars.

Why do I mention that now, you ask? Good question. I guess thinking about old movie fanfare put it in my brain.

The globe – which is the icon of the park – has been Universal’s logo since the early days of the movie studios.

How did Universal get its start?

Founded in 1912, Universal is the oldest surviving film studio in the U.S.

According to one version of the story, businessman Carl Laemmie took a trip to Chicago where he spent a day outside a box office at a nickelodeon (a small movie theater), counting patrons and adding up the day’s take. Within weeks, Laemmie was out of the dry goods business and started buying up nickelodeons.

As the business took off, inventor Thomas Edison formed a company that meant exhibitors had to pay Edison fees to display the Edison-produced “films” based on the patents Edison owned.

There was a lot of bickering and chicanery and in April of 1912, Laemmie and a list of others from the Universal Film Manufacturing Company moved to New York and began producing films and later began production efforts in Hollywood and Los Angeles.

Read Also: Is the Universal Express Pass worth it? An honest review

When did the globe come into play?

From the very beginning. And it makes sense because its films are known all over the world.

At first, the Universal Film Manufacturing Company’s logo looked a bit like a button with a globe in the middle. The words “Universal Films” ran along the outside and a giant U with an F in it was stamped atop the globe.

Over the years, the logo has been redesigned in print several times and as the opening fanfare of each Universal picture even more.

My favorite is might be the 1940 version. It’s got style.

The 1929 one with the plane is also cool. This YouTube video features the Universal globe in its different forms from 1929 to the present.

Of course, the newer versions have that musical fanfare that really instills an almost Pavlovian response.

It’s funny. You don’t really understand the impact these things have over the course of a lifetime.

In later years, when the Universal fanfare music kicks in? Waves of nostalgia. And I can’t even play along on my ear drums.

Where is the globe at Universal Studios?

The Universal globe is located right in front of Universal Studios theme park in Orlando, Florida. It’s on Universal Plaza before you get into the park.

There is also a fountain that produces a cooling mist which is a blast for the kids and also gives a nice effect for pictures.

There is another version of the globe at the park in Hollywood.

Read Also: 20 tips for Universal Studios Orlando that will maximize your trip

Where’s the best spot to get a picture of the globe?

I like to approach from the side of Universal’s Islands of Adventure and photograph the globe from that direction, although I suppose there’s no need to walk all the way from over there.

You can just walk past the regular way and move around towards the Hard Rock and save yourself a few hundred yards walk.

I also prefer to photograph it looking back toward CityWalk. Universal has got a lot going for it, but the Universal Studios entrance is kind of blah in terms of making classic pictures.

I’ll take one from the front for sure but when I want to get artsy, I really move around and use the space.

Does Universal Studios have a parade?

Yes and no. The Universal Superstars parade – which featured SpongeBob, Gru and the Minions, Dora and the Secret Lives of Pets – had its last run on June 4, 2022.

However, a pair of seasonal parades remain active. This includes Universal’s Holiday Parade featuring Macy’s, which runs from November to Jan. 1.

We were in Universal Studios Florida for the last days of the Universal Superstars Parade and it was a lot of fun. But the floats were certainly showing some age. As of this writing, no parade has taken its place.

Did you know the history of the Universal globe? Tell us in the comments!