Does Universal Have Water Rides? The Best Rides That Will Get You Wet 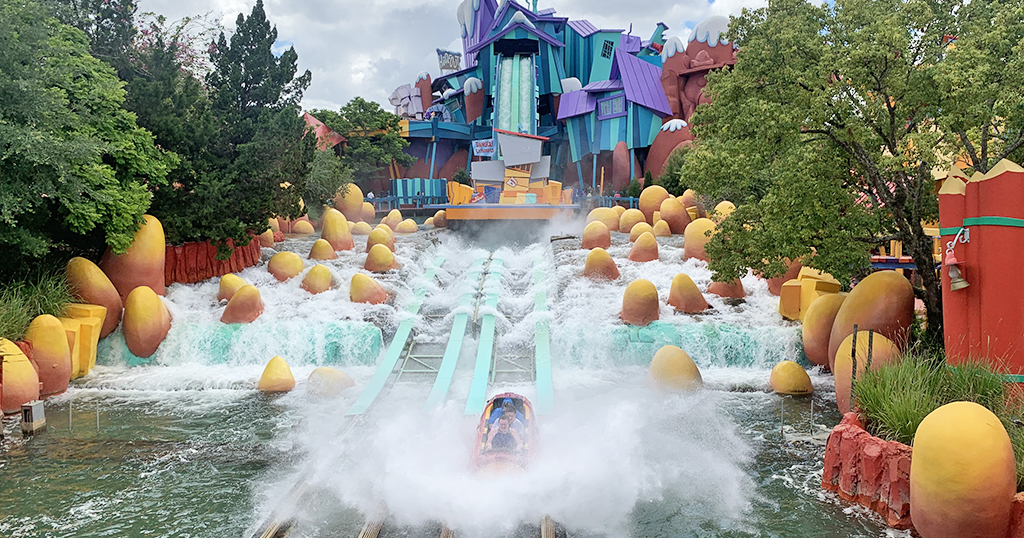 Universal has a few rides that will get you wet. The best ones are located in Islands of Adventure (photo by John Gullion/HeyOrlando.com)

My guy was hot.

Not literally, I suppose, since he was dripping, soaking wet. However, he was angry.

My family had decided to beat the heat with one of the water rides at Universal Studios Florida. Popeye’s & Bluto’s Bilge-Rat Barges in Toon Lagoon at Universal’s Islands of Adventure was the choice.

I had decided to take a pass and set up near the ride’s exit. It’s a great place to people watch as family members leave the ride with emotions ranging from euphoria to fury.

One guy, in particular, was not happy.

Are there water rides at Universal Islands of Adventure?

Yes. And of all the water attractions at Universal Studios Orlando, excluding the water park, Universal’s Volcano Bay, the Bilge-Rat Barges is among the best rides to get messy and sopping wet.

Read Also: Is Me Ship, the Olive a ride at Universal? A look at what’s inside

Specifically, it’s a typical theme water rapids ride with the added bonus of bystanders being able to fire water cannons at the ride vehicles from the children’s activity area, Me Ship, The Olive.

Therefore, Popeye’s and Bluto’s is one ride in the Universal Orlando Resort that will absolutely live up to its billing to get you good and duly wet.

With that in mind, this is why I was a little surprised to see my guy so angry as they exited the line.

He was ringing out his clothes and spitting fire. There were a lot of “I can’t believe” and “I told you” as my kids made their way over to the long line for the not terribly effective full body dryers.

And I will say this. Every single person I saw getting off the ride was dripping wet. Certainly, nobody was spared.

The groups of school children, who I seriously doubt have any idea who Popeye, Bluto or Olive Oyl are, were hurrying to get back in line and take advantage of the short wait times.

Judging by the wait times, even in the heat of the summer, the demand for wet rides in the park isn’t exactly high. The week we were there, the Bilge Rat Barges was consistently among the shortest waits in the parks.

What rides get you wet at Universal Studios?

First, a couple of caveats, we’re not talking about anything at Volcano Bay. The water park is a different conversation. Second, we’re not including any of the “4D” effects rides like the Amazing Adventures of Spider-Man on Marvel Super Hero Island.

Yes, you may get a little spritz of water or mist or fog as you ride through, but not enough to count for this discussion.

If your goal is to get good and soaked, your best bet is to go to Universal’s Islands of Adventure.

I hesitated to include this Lost Continent attraction for a couple of reasons.

First? It stinks. In fact, it’s the biggest waste of time, space and energy at any major Orlando area theme park. The only thing furious about this attraction with 1980 Flash Gordon level effects was me after I went through it.

Third? For a battle involving the God of the Ocean against a mighty morphin Power Ranger-type villain, there’s not that much water being tossed around.

So why am I including it? On the Universal App, it’s listed among the rides, not the shows.

It’s not listed as a water ride, but there are mist screens, water cannons and mortars. You also walk through a water tunnel, so it gets included here. Poseidon’s Fury is located at Islands of Adventure.

But if you pay attention to the words and follow instructions, they are avoidable. This ride is located at Islands of Adventure.

There are several places in the park where kids can cool off.

Chief among them is the Curious George Goes to Town in the Woody Woodpecker’s KidsZone at Universal Studios where kids can get good and truly wet if they so desire.

A lazy river ride turns into an adventure when a giant Tyrannosaurus Rex decides to give your boat the Jeff Goldblum treatment. The only escape?

Down an 85-foot waterfall into the pool below.

If you want to get good and wet, try to get in a front couple of rows of the ride vehicle. This ride is located at Islands of Adventure.

The log flume ride is the closest thing to a water roller coaster you’ll find in the park.

The four-person canoes twist and turn through the world of Dudley Do-Right – a cartoon Royal Canadian Mountie that anyone under the age of 30 probably has never heard of.

This popular ride ends in a 75-foot drop that involves the canoe rocketing down into a big splash. The Universal website recommends wearing a poncho or an extra pair of socks. And of course, both are conveniently available at the nearby shops.

Dudley Do-Right’s Ripsaw Falls does have a thrill factor as the canoe is really moving when it comes down the drop.

There are height requirements to ride. The minimum height is 44 inches. Certainly, it’s one of the better non-roller coaster thrill rides in the park. This is a good ride to use the Universal Express Pass if you paid the extra money.

This ride is at Islands of Adventure.

Read Also: How do you pack a bag for a theme park? The theme park backpack list

This ride is the best way to get good and wet in the park. In addition to the dips and drops and water cannons, there’s an 18-foot octopus that may or may not be based on the classic Robert Altman Popeye movie that starred Robin Williams and failed spectacularly.

If you’re planning on riding it, it’s probably a good idea to dress accordingly. Every person I saw getting off this ride was absolutely soaked. I don’t think a poncho was going to help much.

For example, my daughter, Sofia, wore blue jean shorts and the huge dryers didn’t come close to getting them dry.

“All it did was dry my hair,” Sofia said.

So, we ended up buying some Universal Studios shorts at one of the gift shops. But my other kids walked around the rest of the day in squishy socks and shoes.

I suspect the Universal Studio shops in Toon Lagoon do a pretty brisk business in clothes for people who didn’t think ahead when selecting their outfit for a day at the park.

This ride is located in Islands of Adventure.

Do you have a favorite water ride at Universal Studios? Let us know in the comments.