Blue Milk vs Green Milk, Which One Is Better? Is It Actually Milk? 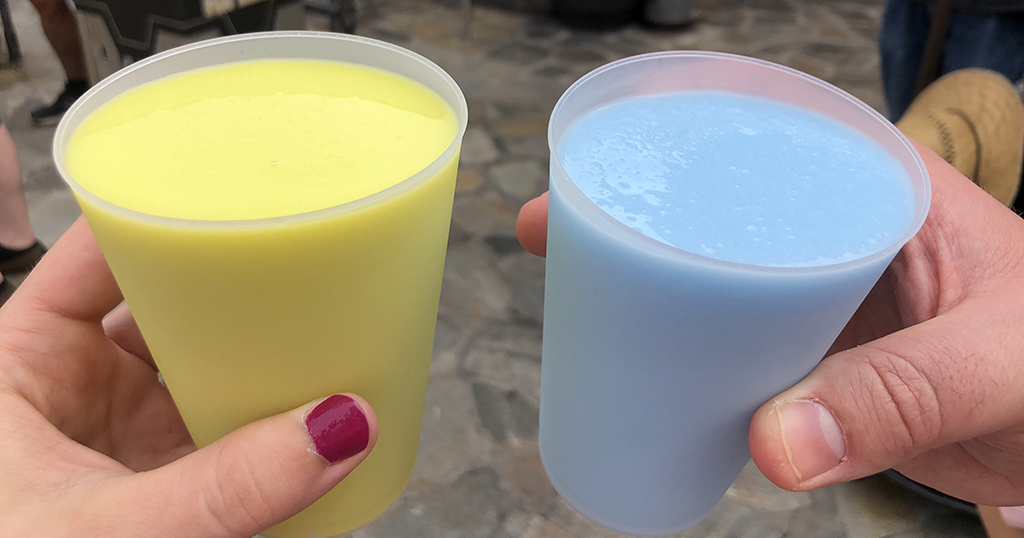 Both green and blue milk have a sweet, fruity flavor (photo by Kirby Russell/HeyOrlando.com)

Blue milk first made its Star Wars universe debut back in 1977 in “Episode IV: A New Hope”. Sheltered from the harsh Tatooine elements in the Lars Homestead, the family drinks the blue-tinged Bantha milk as part of a nutritious breakfast.

I’m sure it’s important for moisture farmers to hydrate before a hard day’s work on the Great Chott Salt Flat outside Mos Eisley. Aunt Beru pours some blue milk for Uncle Owen as the petulant young Luke Skywalker shares his suspicion that their new droids might have been stolen.

The family discusses the message Luke has discovered R2D2 is carrying from Leia to Obi Wan Kenobi. Luke wonders if Obi Wan Kenobi might be related to Old Ben Kenobi. Uncle Owen dismissively changes the subject to the day’s work ahead.

Later in life, Luke continues to include dairy as a key part of his diet. At the end of “Episode VII: The Force Awakens”, Rey finds Luke in exile on Temple Island.

In “Episode VIII: The Last Jedi”, she observes Luke’s daily routine, which includes harvesting green milk from a female Thala Siren. Luke grimaces as he drinks the greenish liquid.

Is the blue and green milk actually milk?

Lactose-intolerant Star Wars fans will be pleased to learn that the specialty drinks served at Milk Stand in Star Wars: Galaxy’s Edge are plant-based.

But remember, always double-check with a staff member about your allergies or food sensitivities.

In the Star Wars films, Luke Skywalker relied on animal products to fuel his general health. This was the case for him as a boy on Tatooine as well as during his time in exile on Temple Island.

When planning the menu for the Star Wars expansion at Disney’s Hollywood Studios, someone at Disney parks decided that milk was a bad choice. The fruity frozen non-dairy galactic drinks now offered at Milk Stand are a better option for park visitors on hot central Florida days.

Both beverages are made using a blend of coconut and rice milk combined with refreshing fruity flavors. They taste like fruit smoothies and are a perfect refreshing treat on a hot day.

Is the green or blue milk better?

My family preferred blue milk, but it’s going to depend on your personal taste. Both are sweet and fruity, but the green milk has a stronger citrus flavor. The blue milk taste is a bit more straightforward with very sweet fruity flavors like pineapple and watermelon.

One of my kids surprised me by saying he liked the green milk better. I suspect he may have given this opinion because he knew it was unpopular.

Read Also: Is Rise of the Resistance worth the wait? Average wait time [PHOTOS]

Are blue and green milk expensive?

If it’s your first time visiting Milk Stand or sampling food items in Galaxy’s Edge, I’d suggest ordering both green and blue milk to share among your group. Sharing is especially advised for folks on a budget due to the $8 price tag on the alien milk. Remember, prices are subject to change.

Either beverage is also available for purchase in a Bubo Wamba Family Farms novelty drink vessel.

It’s true that the themed food in Disney’s Star Wars land is expensive, even by theme park standards. It may be helpful to consider the immersive restaurant experience as built into the price.

We had great experiences at Milk Stand, Ronto Roaster’s and Docking Bay 7 Food and Cargo by using mobile ordering to bypass the lines.

My family also opted to order several entrees to share. That way, everyone had the opportunity to taste a variety of exotic and colorful menu items.

I typically pack snacks like applesauce pouches and Uncrustables for my kids on theme park days. They’ve been known to take two bites of an expensive kid’s entrée and declare that they are no longer hungry. Safe to say this strategy has saved our sanity (and budget) more than once on Disney park days.

That being said, Docking Bay 7 did have one item on the kid’s menu that was kid-tested and mother approved: Takodana Veggie Dippers. It’s a bowl of black bean hummus served with chilled vegetables and crackers. My family loved it.

In fact, it was cool and refreshing as well as visually appealing. Plus, the children ate their vegetables at a theme park. Huzzah!

I’d even recommend this one as a snack or starter for veggie-lovers without kids.

Read Also: Where is the Wookie Cookie at Disney? A look at this Star Wars treat

What is the difference between green milk and blue milk?

Although both options are very sweet, I found the green milk to have a more complex flavor profile with some sour and even slightly bitter undertones.

It’s made with strong citrus flavors like grapefruit, mandarin orange and orange blossom. Green milk also has hints of passion fruit flavor. Conversely, the blue milk has flavors of dragon fruit, pineapple, watermelon and just a subtle hint of lime.

My guess is that blue milk is going to be more appealing to most people and especially to kids. However, if you love grapefruit, the green milk might be for you.

What is in Star Wars blue milk?

Blue milk at Star Wars Galaxy’s Edge is a plant-based beverage. I’d describe it as a tropical fruit smoothie with a very thin consistency. It’s made with coconut milk, rice milk and fruity flavors. The ingredients make these non-alcoholic drinks vegetarian and vegan friendly.

If you get a chance to visit Oga’s Cantina, you’ll find a specialty version of blue milk on their menu. Served chilled, the Blue Bantha is topped with a sugar cookie inspired by Tatooine’s shaggy beasts of burden.

Have you tried green or blue milk? What did you think? Let us know in the comments!