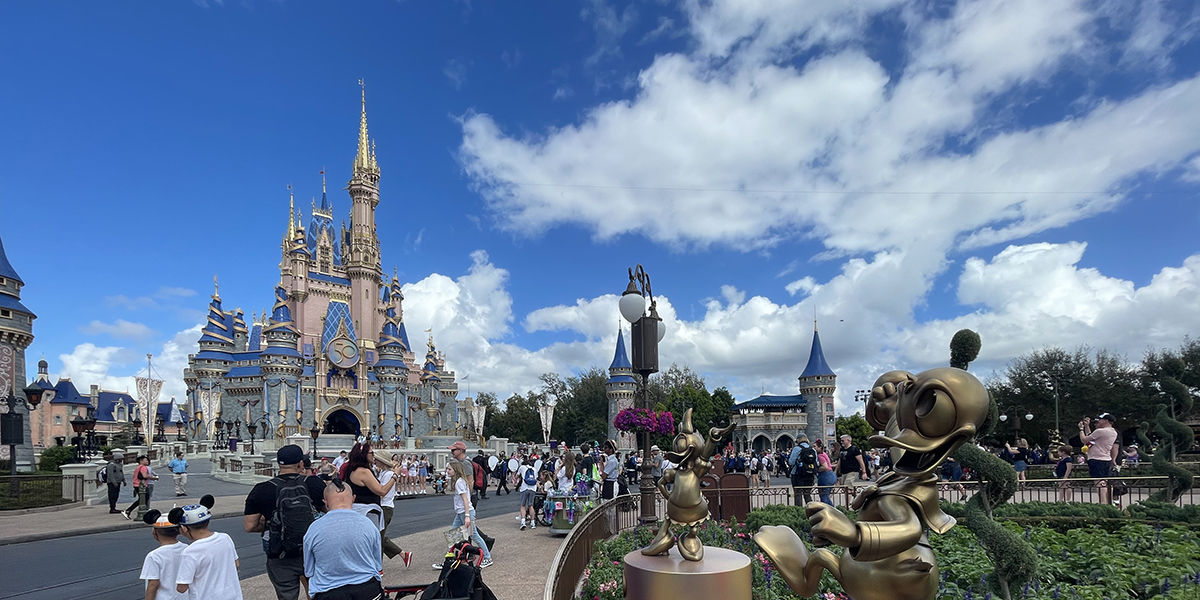 Planning out your "rope drop" can help you get to popular rides that traditionally have long wait times (photo by James Overholt/HeyOrlando.com)

First of all, what does it mean to rope drop at a theme park?

A rope drop simply means to arrive before the park opens. When the “ropes drop”, you’ll be one of the first people in line for one of your favorite rides.

Truthfully, it’s an amazing experience to be among the first in line for one of Magic Kingdom’s most popular rides. But it’s good to have an idea of which ride you want to head to first.

What does it mean to rope drop at Disney?

To “rope drop” at Disney means you must arrive early so you can be one of the first ones in line for a popular attraction.

It can be an excellent strategy for avoiding the perpetually long lines for headliner attractions like Rise of the Resistance in Hollywood Studios or Avatar: Flight of Passage in Animal Kingdom.

Additionally, it is a great way to prioritize riding your favorite attractions. The earlier you arrive, the more likely you are to avoid long wait times.

What is rope drop at Magic Kingdom?

Magic Kingdom is a bit different from other Walt Disney World parks because guests are allowed to enter Main Street U.S.A. and the Hub (the garden area immediately in front of Cinderella Castle) before the park officially opens.

Thousands of people do this every day. Cast members are stationed at each of the pathways that lead to the different areas of the park.

It’s a great park to rope drop for many reasons. Notably, it has many iconic attractions and it’s the only park that does not offer any single rider lines.

Read Also: Single Rider Lines at Disney World, Which Rides Have Them?

The Seven Dwarfs Mine Train is probably the most popular choice for rope drop. Located in Fantasyland, it has consistently long waits throughout the day.

With the new Genie+ system, the only ways to skip the line – or avoid a long one – are to purchase Individual Lightning Lanes or rope drop it.

That being said, Seven Dwarfs might have some competition when the Tron Lightcycle Power Run Rollercoaster opens this April in Tomorrowland.

Currently, other popular attractions to rope drop include:

These rides all have longer waits throughout the day.

Our family has had a lot of success with choosing one very popular ride followed by a nearby ride that typically has a moderate wait time.

For example, if you head for Seven Dwarfs first thing, you can follow it by the Many Adventures of Winnie the Pooh.

Using this “bundling” rope drop strategy can save a lot of time. It’s possible to basically walk to multiple rides within the first few minutes of the official park opening time.

If you want to prioritize Space Mountain, you will have a lot of other rides nearby, like the Tomorrowland Speedway or Buzz Lightyear’s Space Ranger Spin.

Which rides you decide to prioritize will likely depend on your family’s goals and whether or not you purchased Genie+. Either way, be sure you have an idea of where you’re heading as you arrive to the park.

What time should I arrive for rope drop?

Times vary seasonally, but it’s generally between 7-9 am. Always check the My Disney Experience app for the official park hours and complete guide to show times and scheduled events.

If you want to rope drop the Magic Kingdom, I recommend arriving at least one hour before the listed opening time. There are a lot of steps to take to get there, and minor delays in these processes add up.

For example, there might be some traffic on Disney property due to construction. It can take a few minutes to wait your turn to pay for parking.

If you’re planning ahead, Disney posts park hours months in advance. Be sure to check the times closer to your arrival because Disney often adjusts park hours based on crowd projections.

You might be directed to park at the very end of the row, which will add a few minutes to your walk to the Transportation & Ticket Center. You also need to budget for a few minutes to get through security.

Additionally, there can be delays with the monorail or ferry. Then there can be congestion at the touchpoints entering the park. We have found that the earlier you arrive, the less traffic you’ll encounter.

With that in mind, if you get there a few minutes earlier than necessary, treat yo’self with a specialty coffee beverage at Main Street Bakery.

Better to be a few minutes early and have some time to mill about. It would stink to go to the effort to get up early and find yourself just behind the crowds.

There’s also the Magic Kingdom Welcome Show at the front of the park just before the official opening. Seeing this show always reminds me that I’m at the most magical place on Earth.

Does Disney still do rope drop?

While rope drop is still common at Disney, it’s important to keep in mind that the Walt Disney World Resort has made some changes allowing 30-minute early entry for Disney resort guests.

Guests who stay at a Disney Resort hotel and other select hotels can gain early entry to the Disney parks each day of their visit.

This perk is offered to guests staying at resorts such as the Art of Animation Resort, Pop Century Resort, Port Orleans Resort and many more. Visit the Disney website for the complete list.

How the parking area affects the rope drop

Magic Kingdom is also different from other Disney parks in that it takes extra time to get there from the parking lot.

At Disney’s Hollywood Studios, EPCOT and Animal Kingdom, guests park and either walk or take a quick tram ride to the park entrance.

There’s an extra hop, skip and jump when you’re heading to the Magic Kingdom. In fact, you’ll park at the Transportation and Ticket Center (TTC) rather than Magic Kingdom itself.

Guests process through security at the TTC before boarding either a monorail or ferry.

The monorail takes you around the Seven Seas Lagoon. It’s actually super cool because you get to go through the Contemporary Resort hotel on your way to the Magic Kingdom.

The ferry takes you across Seven Seas Lagoon.

Should I take the ferry or the monorail?

The ferry boat is usually faster, but the monorail is a more unique experience. I say take the monorail to the park. Then, take the ferry back to your car in the evening.

If you leave after the fireworks or close to park closing, both lines will be long. However, the ferry boats process passengers in significantly larger batches.

So even with more people waiting in line for the ferry, it is almost always quicker on the return trip compared to the monorail.

Rope drop simply means you’re arriving at the park right when it opens to avoid crowds. Early entry is gaining access to the park before the official opening – a perk of staying at one of the Disney resorts.

Guests at Disney hotels can be admitted to the park 30 minutes before the posted opening time.

This gives hotel guests a little bit of a head start compared to offsite guests. With early park entry, I think rope dropping works best at the Magic Kingdom because there are so many rides.

At the other parks, crowds tend to concentrate on just a few popular rides early. There’s less of an advantage to rope dropping for offsite guests.

This benefit will continue throughout all of 2023, according to the Disney website.

The evening hours are usually held at Magic Kingdom on Wednesdays and EPCOT on Mondays, but be sure to check the official calendar for details.

Many of Magic Kingdom’s popular attractions are planned to operate during these special hours, including the Seven Dwarfs Mine Train.

This is a great perk for Disney guests who want to maximize their Disney World vacation. Visit the Disney website for a full list of hotels.

Do you rope drop at Magic Kingdom in Orlando, Florida? What are your best tips? Let us know in the comments.