The Harry Potter Breakfast Experience at Universal, an Honest Review 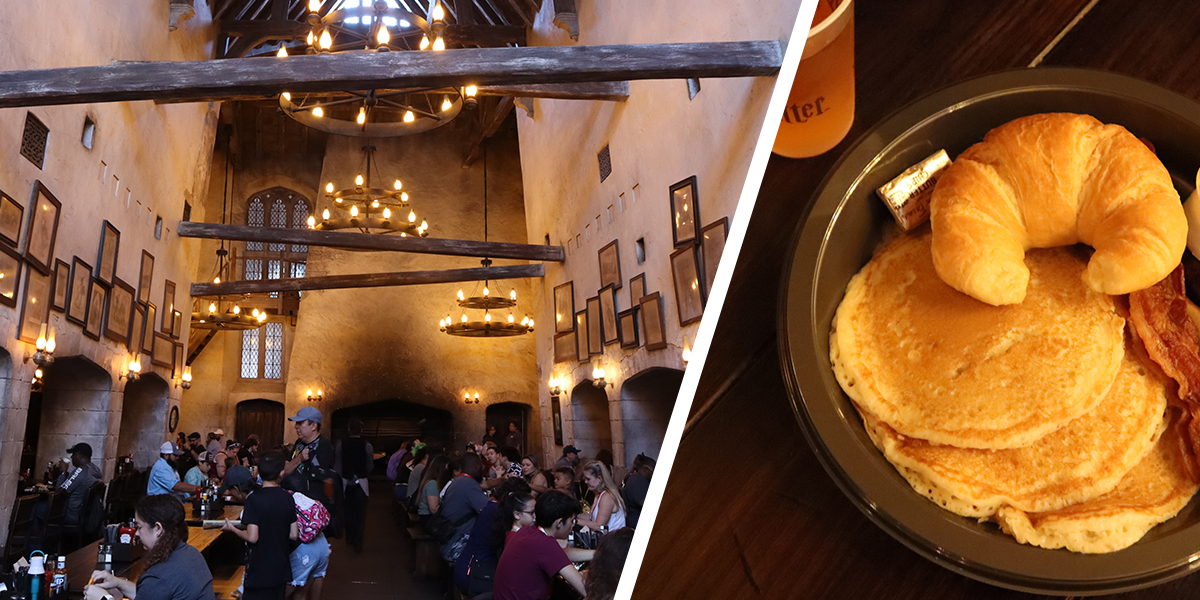 You can get an American or English breakfast at the Three Broomsticks in the Wizarding World of Harry Potter in Orlando (photo by Morgan Overholt/HeyOrlando.com)

When we booked our Universal Studios Orlando trip, the website offered me a Harry Potter package. In particular, it included breakfast at one of the two Wizarding World sit-down restaurants.

I passed. But in hindsight, I should have taken the package.

When we got to Orlando, I decided it might be nice to lock down a day to do our Harry Potter breakfast. We’d budgeted well and could afford to splurge.

I went to the hotel ticketing agent and asked if it was possible to get reservations for breakfast at Three Broomsticks.

“Yes,” the agent helpfully replied. We discussed pricing. I paid the $80 plus tax for our family of three adults and two kids. He gave me an arrival time at which point my “reservation” window started.

Does the Three Broomsticks take reservations?

When we arrived at the restaurant on time, we overheard the “greeter” speaking with a woman and her family. She didn’t understand why she had to get in line if she had a reservation.

I knew something was up but I still clarified with the Universal employee who apparently got his job by being keen to cosplay. “Avada Kedavra,” he screamed when I told him I had a reservation for this time. Well, not exactly.

He told/shouted at us to go through the otherwise empty queue outside the restaurant where we could wait until there was room inside.

We would be waiting, he assured us, because Three Broomsticks does not take reservations.

Later, I was told by a team member that the vouchers, which said breakfast on them, were not in fact breakfast vouchers but were good for any time of the day.

I felt like I’d been hit with a confundus charm. Notwithstanding, I went back and waited to order the meal I’d paid for days in advance.

What’s on the breakfast menu?

The Pancake Breakfast is three buttermilk pancakes, crisp bacon and a link sausage with a butter croissant.

At the Three Broomsticks, they also have the Continental Breakfast. It is a colorful array of fresh fruit served with croissants accompanied by assorted jams.

And the Porridge Breakfast is old-fashioned steamed oats with fresh fruit and a butter croissant.

At the Leaky Cauldron, there is the Egg, Leek and Mushroom Pasty. The scrambled eggs are wrapped in pastry with mushrooms and leeks.

It is served with breakfast potatoes and fresh fruit as well as the self-explanatory apple oatmeal flan with yogurt and fruit.

What is the difference between the Leaky Cauldron and the Three Broomsticks?

The menus are a little different with the Leaky Cauldron skewing more towards authentic UK offerings. The Three Broomsticks is a little less themed in its choices.

I found it easier to get into the Leaky Cauldron, but we were able to walk into either during off hours.

Read Also: What to wear to Harry Potter world: The best outfit ideas for the park

Which is better at Universal, the Leaky Cauldron or the Three Broomsticks?

It’s hard for me to be an impartial judge as I had a poor experience at Three Broomsticks and a perfectly acceptable one at the Leaky Cauldron, which has fewer menu options.

I’d say for most people, it comes down to whether they prefer Hogsmeade or Diagon Alley.

Three Broomsticks is located on the Hogsmeade side in Islands of Adventure. The Leaky Cauldron is in Diagon Alley on the Universal Studios side.

And what if you want a good stiff belt, Harry Potter style? The Hog’s Head pub is located in the back of the Three Broomsticks.

In Diagon Alley, you’ve got The Fountain of Fair Fortune which serves a variety of drinks including Gillywater, Pumpkin Fizz, beers and other beverages, alcoholic and non-alcoholic.

Why is it called a Hog’s Head?

The Hog’s Head was a slightly disreputable pub and inn in Hogsmeade in the Harry Potter books.

And, a hogshead is a large cask or barrel.

Is the Leaky Cauldron good?

Maybe, if you’re grading on a sliding scale. In both Leaky Cauldron and Three Broomsticks, you’re paying for the experience.

Are there a dozen restaurants in Universal Studios, Universal’s Islands of Adventure and CityWalk that have better food? Yes. I would concede that there are.

But I do enjoy the culinary offerings of the United Kingdom. I like a good savory pie.

I used to make a mean shepherd’s pie at home. But I was the only one who liked them. You can also talk me into a good mushroom pastry or bangers and mash. It’s hard to mess up sausage and potatoes.

My wife Leslie enjoys a platter of good fish and chips and while the ones at the Cauldron weren’t up to some of the places she tried in London, she said they were still pretty good.

And while I had a bad experience at Three Broomsticks, I quite enjoyed the Potter atmosphere at the Leaky Cauldron and nobody even yelled at me.

So, is it worth the price? I love a full English breakfast, but for $18, this wasn’t it. Now, I have to say I was not in a happy place when we ate. So it’s possible that it’s better than I’m giving it credit for. However, on the whole, I’d rather eat at the Waffle House.

However, I enjoyed the lunch and dinner menu and would go back again.

Read Also: What is the Knight Bus in Harry Potter? Is the bus at Universal real?

What’s on the lunch and dinner menu at the Leaky Cauldron?

I’m a fan of the Beef, Lamb & Guinness Stew. And as I said, Leslie was pleased with the fish and chips.

If you’re looking for something different from the usual theme park fare, Toad in the Hole is a popular dish. It is English sausage baked into a Yorkshire pudding and served with onion gravy, minted peas, root vegetables and roasted tomato.

If you want a handheld, aka a sandwich, there’s the Specialty Chicken. It has grilled chicken breast, apple butter mayo, Colby cheese, smoky apple bacon and roasted tomatoes on a housemade specialty bun.

There’s also the Banger which is sort of an English Po’ Boy. It has roasted English sausage, mustard aioli, roasted tomatoes, sautéed cabbage and onions on a crusted baguette.

What’s on the lunch and dinner menu at the Three Broomsticks?

The main course will be a combination of rotisserie smoked chicken and spare ribs with corn on the cob and roast potatoes.

The smoked turkey leg is also an intriguing option. It really does taste like ham.

We found that in the afternoons, there were often empty seats and good shade on the patio, which is located behind Hog’s Head and Three Broomsticks.

Also, many sites say you can get reservations at Three Broomsticks and the Leaky Cauldron if you book the Potter package online.

My suspicion is if you show up at Three Broomsticks claiming a reservation, they’re going to yell at you.

Have you had breakfast at Three Broomsticks or Leaky Cauldron? Let us know in the comments!