What Are Orlando’s Best Theme Parks for Adults? 11 Parks, Ranked 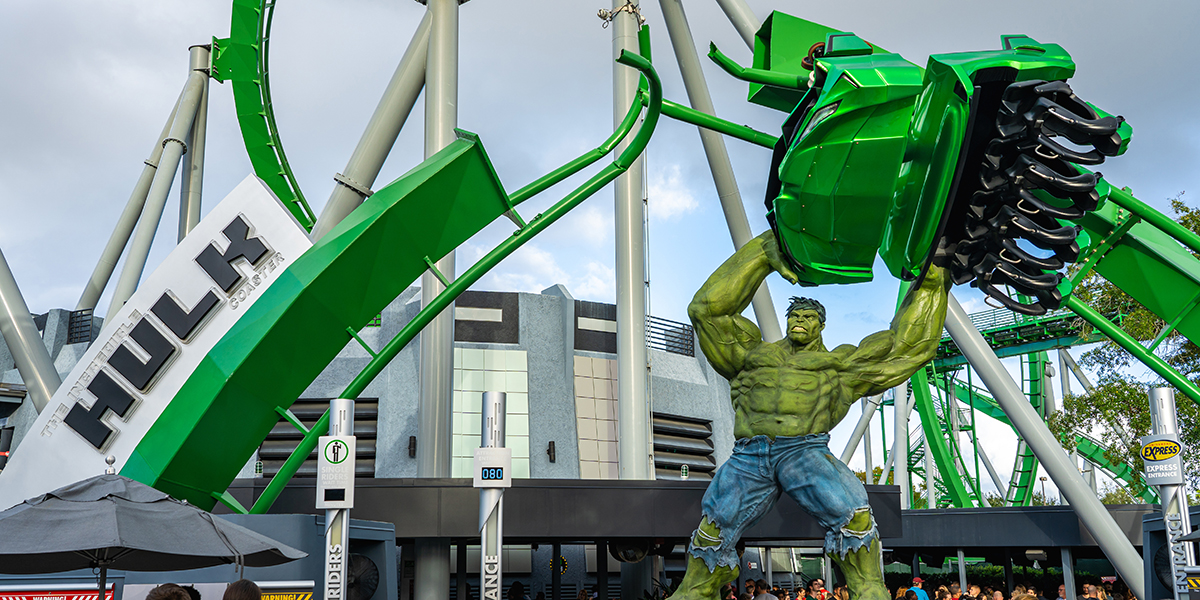 Universal has one of the best theme parks for adults based on its number of thrill rides. Pictured: The Hulk roller coaster (photo by Eudaimonic Traveler/shutterstock.com)

It may seem obvious, but people should be allowed to chase their joy.

However, the internet sometimes disagrees.

Every so often, a grouchy keyboard warrior takes to the message board to shame others for the sin of finding their joy.

One of the most frequent targets is known as “Disney adults”. In other words, childless – or temporarily child-free – adults who take their well-earned vacation time and money and celebrate at Walt Disney World Resorts or one of the other Orlando area theme parks.

Like any group, Disney adults may occasionally have a few people who can push the limits to the point where their pursuit of happiness infringes on someone else’s.

But for the most part, these are just vacationing adults. And they like to spend time at Disney or in the Wizarding World of Harry Potter. What’s so wrong with that?

From my point of view, nothing.

Is Disney or Universal better for adults?

It depends. I’d say some of the Disney parks could be better for adults. If you like Star Wars? Perhaps Disney. Harry Potter and roller coasters? Go Universal.

I like Disney and going to resorts and Orlando’s theme parks in general. I like how much the kids enjoy it but also because I enjoy it myself.

And it’s not like the theme parks aren’t built with adults in mind. In any of the best theme parks, there are plenty of things for adults to do to make the purchase price of the ticket worthwhile.

In fact, let’s rank the best parks for adults in the Orlando area.

Read Also: 5 best Disney resorts for adults, a guide with pricing and tips

This one is ranked last for good reason. Look, I know what I said and I’m not trying to spoil anyone’s joy. But if you’re an adult and you choose to go to Peppa Pig Park sans kids, I have some questions.

I’m not going to be judgmental right off the jump. However, as someone with kids of a certain age, I’ve spent quite a bit of time in the Peppa world.

To illustrate, my youngest refused to call her swimsuit anything but a bathing costume for years.

Look, the Peppa Pig theme park is not for our kind no matter how much we like jumping in muddy puddles.

I do not begrudge an adult who enjoys a good water park.

Whether it’s Volcano Bay at the Universal Orlando Resort or Blizzard Beach or Typhoon Lagoon at the Walt Disney World Resort, there are plenty of accommodations from cabanas to welcoming spots with umbrella drinks – for adults.

But that’s what they are, accommodations. It is a way to keep us entertained while the kids put the parks to their full and proper use.

Honestly, if I want a day in the sun and water, I’ll skip the slides and head to a nice sandy beach, preferably one with a nice open-air bar nearby.

A lot of adults I know are into LEGOs. It’s a cool and completely proper hobby for adults, like 3-D puzzle building.

And the Flying School roller coaster is a good ride no matter your age. But LEGOLAND just isn’t as adult friendly as some of the other options on our list.

Read Also: Do you need a child to go to LEGOLAND Florida? Is there an age limit?

I grew up with SeaWorld and loved the animal encounters, seeing the dolphins and orcas and other aquatic life. We’ve learned some things since I was a kid in the 70s.

I’m certainly comfortable going to regular aquariums and zoos. With that in mind, I do think it’s time SeaWorld began the process of getting out of the orca displaying business.

Today, SeaWorld – setting aside the animal encounters completely – has plenty of attractions to offer thrill-seekers. The list includes roller coasters like Kraken, Mako and Manta. It also offers the Journey to Atlantis water ride, which is pretty fun.

The food and drink scene is decent as well but falls short, in my opinion, of the Disney and Universal parks on that count.

Busch Gardens is a pretty great park for adults, but we’re dinging it a little on this list because we’re Orlando based and it’s a 1.5-hour drive to Busch Gardens on Interstate 4.

Certainly, even in the best of conditions, I-4 can be something of a beast.

The animal exhibits are interesting. However, the food scene is lacking compared with other adult-friendly theme parks.

Listen, I love the nostalgia of the Magic Kingdom. Therefore, any time I’m at Walt Disney World, you’ll find me heading down Main Street. But, if we’re being honest, the Magic Kingdom is the least adult of the WDW parks.

But there aren’t a lot of adult-level rides currently in the Magic Kingdom. Tron will improve that situation, but still, there are big parts of the park that are built for the kids and that’s cool.

Also, as much as I enjoy a hot dog at Casey’s, the dining scene in the Magic Kingdom is much more family oriented. It’s not that you can’t find good food, it’s just clearly catering to families.

Also, there are other places in Walt Disney World where you can see Mickey Mouse.

Now we’re getting into the hard decision-making. Universal Studios has a lot to offer adults, a thriving food scene mostly in the various city-themed sections of the park. For example, we’re big fans of Lombard’s Seafood Grill on the San Francisco Wharf.

I think the Diagon Alley section of the Wizarding World of Harry Potter is better overall but somehow less adult friendly than its Hogsmeade counterpart.

Forbidden Journey and Gringotts cancel each other out, but Hagrid’s Magical Creatures Motorbike Adventure is a huge plus for adult Harry Potter fans in Islands of Adventure.

I’ll talk more about this when we get to Disney’s Hollywood Studios. But aging IP like The Simpsons and Star Wars – and to a lesser degree Harry Potter – is at least as much of an attraction for adults as they are kids.

The Simpsons have been around for 40 years. There are a lot of Homer fans with mortgages and fading hairlines at this point.

This is hard for me because I’m a Star Wars adult. It’s been a part of my life for 45 years at this point. I was three when it came out so that means you have Star Wars fans a decade or more older than me.

People who have retired love the Skywalkers saga.

And Galaxy’s Edge is legitimately great. Rise of the Resistance and Smuggler’s Run are great rides. The food is great. The theming is great. Galaxy’s Edge is just as immersive an experience as the Wizarding World. It’s transformative.

And also, Hollywood Studios has adult-friendly restaurants like the Brown Derby. However, I wonder if anybody under 30 even knows that a real Hollywood restaurant inspired it.

Same with the Twilight Zone Tower of Terror. How old do you have to be to know that there’s more to that ride than just the drop? There’s even an Indiana Jones show. How many kids are into Indiana Jones?

But the park is heavy on Disney Jr. stuff, Frozen and Toy Story Land stuff – though original Toy Story fans are getting some wrinkles these days, too.

It’s mostly things designed for the younger park guests. Can an adult have a great time in Hollywood Studios? Sure. It’s just not the most adult option.

Universal is chiefly ranked on the strength of its thrill rides. Examples include the Incredible Hulk Coaster, the aforementioned Hagrid’s and the Jurassic World Velocicoaster.

There are major parts of the park that aren’t really for adults including the section devoted to Marvel which is a bummer considering all the adult Marvel fans.

The food and drink scene is good. We enjoyed Mythos. However, by and large, I’d rather eat in Universal Studios Orlando and honestly just go out to City Walk.

I’d probably ride the Hogwarts Express over and eat in San Francisco or New York.

Read Also: Universal Studios vs Islands of Adventure in Orlando, which is better?

In a shocking upset, the theme park generally considered to be the most adult friendly comes in second on our list.

The World Showcase is great for adults with genuinely good food and drinks and some diverting shows. It’s a nice spot for an afternoon of strolling around the world sampling food and beverage.

The Guardians of the Galaxy ride provides an honestly thrilling coaster, maybe the best ride in Orlando.

Also, rides like Soarin’, Mission Space and Test Track are fun for adults.

I’m as surprised as you are, but Disney’s generally least favored park has a real vibe as you stroll through Pandora’s World of Avatar into Africa and Asia.

Avatar Flight of Passage is a fantastic ride and the Na’vi River Journey is chill and cool and all black-lighty fun.

Kilimanjaro Safaris is one of the better zoo experiences I’ve ever seen, and the food in Africa and Asia is of a similar quality to EPCOT.

On our last visit, my friend and I found an outdoor table at the Satu’li Canteen and ate cheeseburger pods and drank strangely flavored and colored beers while the kids rode rides and shopped.

Do you have a favorite adult-friendly theme park destination in the Orlando area? Let us know in the comments.