Where Is the Wookie Cookie at Disney? A Look at This Star Wars Treat 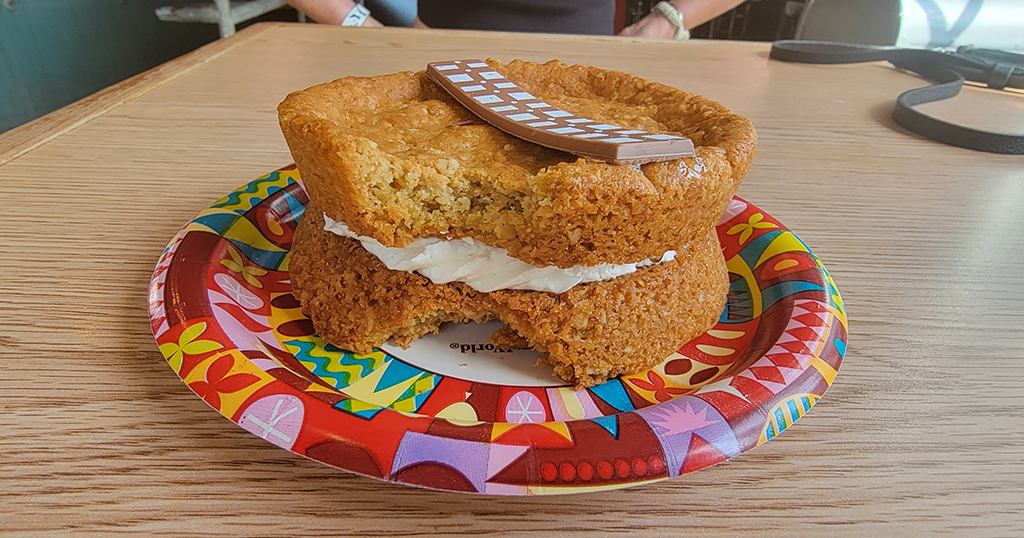 The Wookiee Cookie at Disney is basically a fancy oatmeal cream pie (photo by James Overholt/HeyOrlando.com)

Wait, is it Wookiee or Wookie?

Kashyyyk (a.k.a. Planet Wookiee C) natives, like Chewbacca, will know that Wookiee is spelled with two e’s. However, you’ll commonly see it spelled with only one.

I’d rather avoid offending folks like Black Krrsantan (the assassin for hire introduced in The Book of Boba Fett on Disney+), so I’ll do my best to spell Wookiee correctly.

If there’s one thing that Disney is known for, it’s snacks. They have a truly magnificent selection of delectable delights that are specific to certain parks or locations.

Popular snacks include the Mickey Bars, Mickey Pretzels and Dole Whips. In recent years, Disney has expanded the availability of some of its most popular treats.

However, there are certain fan favorites that remain specific to only one park or location. Specifically, you can only get a Citrus Swirl at Sunshine Tree Terrace in the Magic Kingdom’s Adventureland.

And you can only find a Carrot Cake Cookie at the Trolley Car Café on Hollywood Boulevard near the main entrance of Hollywood Studios.

Some of these items are perennial menu favorites that stand the test of time. Others are only available seasonally or during special events. For example, there’s the Mickey’s Not So Scary Halloween Party or Mickey’s Very Merry Christmas Party.

Read Also: Where is the Cheshire Cat Tail at Disney World?

With recent park expansions like Pandora: The World of Avatar and Star Wars: Galaxy’s Edge, Disney has designed entire restaurants with a themed immersive experience in mind.

In Star Wars: Galaxy’s Edge, guests can sample treats from the Star Wars universe. Visit Milk Stand to try the Green Milk or Blue Milk. Fans of the film will recognize the beverages that Luke Skywalker imbibes on, Tatooine and later Ahch-To.

You can also find Star Wars-themed food at Ronto Roasters or Docking Bay 7. Ronto Roasters serves different versions of their Ronto wrap for breakfast and lunch. I love their fresh and colorful Rising Moon’s Overnight Oats on the breakfast menu.

Docking Bay Seven has an exotic menu that is a must-try for any serious Star Wars fan. Offerings like Fried Endorian Chicken Tip Yip and Moof Juice will have you looking up planets on Wookieepedia.

Place a mobile order using the My Disney Experience app for lightspeed service at this quick-service location.

Even before the addition of Star Wars: Galaxy’s Edge, Disney’s Hollywood Studios had been the epicenter of all things Star Wars at Disney.

Around the corner from Galaxy’s Edge near Star Tours, you’ll find Backlot Express. Although technically located in the Echo Lake area of the Disney park, this restaurant has been retrofitted with loose Star Wars theming.

They typically serve burgers, french fries, salads and chicken strips. There have been several menu updates over the years in keeping with food trends.

For example, a few years ago they were serving Dark Side Chicken and Waffles. Additionally, there has been a long-standing tradition of Star Wars desserts.

My kids used to love the Darth Vader chocolate peanut butter cupcake. The BB-8 vanilla cupcake was another popular option. Nowadays, there’s a new Star Wars goodie on the scene.

Look for Wookiee Cookies on the menu at Backlot Express in Disney’s Hollywood Studios. These chewy oatmeal cookies filled with a generous amount of vanilla buttercream frosting are only available at this quick-service location.

One of my favorite Disney treats is the Carrot Cake Cookie. This long-time fan-favorite is only available at the Trolley Car Cafe near the park entrance. Sometimes the line is super-long and I’d rather not wait.

The nice thing about the Wookiee Cookie being available at Backlot Express is that you can place a mobile order and skip waiting in line.

If you’re after a Carrot Cake Cookie, you may find that a Wookiee Cookie is a good substitute that is more convenient to obtain.

However, when it came to the vanilla cream filling, this cookie turned to the dark side. The Disneyland version of the delicious cookie gets a chocolate-lovers otherworldly treatment. It is a chocolate cookie with a chocolate hazelnut filling, and it’s covered in chocolate sprinkles.

You can find the Disneyland Wookiee Cookie and other Star Wars treats at Disney’s Grand Californian hotel.

One popular treat at the GCH holiday cart is the pretzel lightsabers.

These pretzel sticks have been dipped in a colorful white chocolate coating so that they look like blue sabers, red sabers and green sabers.

It depends on where you get it. There are also a few restaurants that sell their own version of the Wookiee Cookie, and some of those do have nuts. Always double-check with a staff member about your allergies.

Some of our staff members have tree nut allergies, and we were still able to try the Wookiee Cookie at Disney World.

Always ask your crew member in case the ingredient list changes. Dessert options on this menu also include allergy-friendly cookies and brownies.

The version at Disneyland has a chocolate hazelnut filling, so it’s not safe for those with tree nut allergies.

Have you tried a Wookiee Cookie? What did you think? Let us know in the comments.